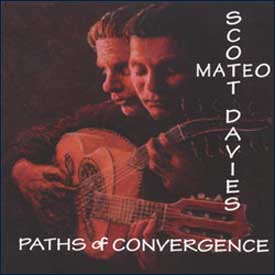 With Paths of Convergence, his first solo release, Scott “Mateo” Davies seeks to share his love for the musical forms that have shaped his artistry by bringing together contemporary Flamenco, Astor Piazzolla’s Tango Nuevo and the innovative folk songs of Bob Dylan with the music of the Moorish Empire.

Listen to all the tracks and download free mp3 files on the Playlists and Downloads page.